It Literally Took a Village to Preserve Penllyn Woods 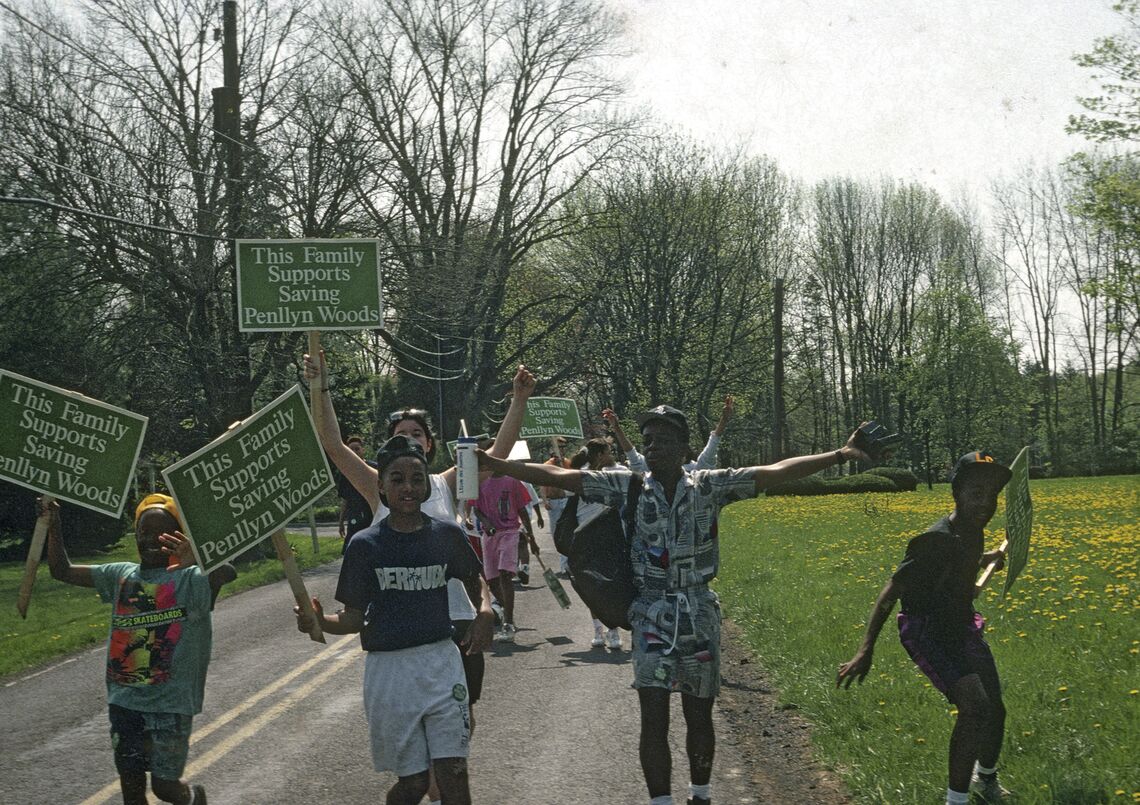 Community members show their support for saving Penllyn Woods in the 1990s.i

In the 1840’s and 1850’s Quaker activists in Penllyn kept enslaved people seeking freedom safe in a cave near the Gwynedd Quaker Meeting House, known as the “Orthodox Cottage,” in Penllyn Village, before they were moved to the Foulke Mansion nearby. The Mansion is gone, but the Orthodox Cottage remains—expanded and now a private home. One of the Village’s residents, E. Gloria Stewart Jones, chronicled the historic connections between the Underground Railroad, Bethlehem Baptist Church and the people who settled in Penllyn Village. Her book Penllyn Village, Lest We Forget, combines history with personal memories from residents of the Village. One of the chapters details the residents’ fight to save Penllyn Woods from development—a historic David versus Goliath battle that ultimately preserved 55 acres of woods and trails.

Her niece, Carol Jones has a million stories about Penllyn Woods, and each of those stories begins with a recollection of family and community. “We grew up in the woods,” she says. “My dad was a hunter, unlike most people who got to shop in the grocery stores, we ate what my dad brought home from the woods. When you’re poor, that’s what you do.”

She remembers how Penllyn Woods brought the larger community—beyond Penllyn Village—together. Equestrians. Scouts. Hunters. Her memories are awash with anecdotes featuring the people who wove the fabric that made Penllyn Woods irreplaceable.

“Karl Sacks had the hounds,” she says, referring to the legendary leader of the Highland Hunt, “and there was a rifle range, too. On Sundays the local people who hunted would go up and shoot clay pigeons.” She and her friends camped in Penllyn Woods with the scouts, and even the family’s Christmas trees came from the woods.

Carol has lived in Penllyn Village all her life, and in her 60+ years, she has watched—and made—history. “In the early 70‘s my dad sat us down and told us things were going to change. Mr. Ingersoll said the family was going to put the woods up for sale.” Development seemed inevitable, but the residents of Penllyn Village decided to fight.

“My father went to the Township,” she says, but didn’t get much support. The developer purchased the property for $250,000, she recalls. “That included both sides of the railroad track. He immediately built the Polo Club, so we knew Penllyn Woods would be next.” She explains that the only entrance to the Woods was the Penllyn Village playground. They foresaw profound and unacceptable impacts on their village and on the larger community.

Former State Representative Kate Harper credits the Penllyn Village residents for raising the alarm. In a 2019 blog post celebrating the 25th Anniversary of Penllyn Woods’ preservation, she points out that the effort to preserve Penllyn Woods was a seven-year battle. “Candidly, the group knew they had to ‘keep the pressure on’ with the local township supervisors when setbacks and lawsuits threatened to derail the preservation effort, but they also publicly supported the Township officials, too, in spending the money to buy the land, in Letters to the Editor and in answering the critics.”

Carol says that Dave Froehlich brought the Wissahickon Valley Watershed Association (WVWA) into the picture. Dave is the former Executive Director of WVWA. The organization is now called Wissahickon Trails. “The Watershed printed materials for us. We had soul food dinners, meetings at the church, just to keep people updated. And the Watershed purchased the ‘Save Penllyn Woods’ signs. That’s when the Township started to listen.” She says that Wissahickon Trails provided information to the Township about how sensitive this particular parcel of land is. “The land didn’t need to be developed. You would have destroyed a neighborhood, the ecology.”

The Penllyn Woods and Wissahickon Trails team recruited like-minded citizens to work with them, including Saly Glassman, Debbie Simon, Phoebe Driscoll and Kate. “It was a time there were no partisan politics involved,” Carol explains. “Lower Gwynedd was much smaller then. It was the first time in my lifetime that we saw Lower Gwynedd working together for the common good for all. Lower Gwynedd (Township Supervisors) put their butts on the line for this.” She stops for a moment to think about the magnitude of what a group of motivated citizens achieved in preserving Penllyn Woods. “It’s not just the ball fields, it’s the land, too. It’s a gem that has been sitting there for years and years.”

Correction: A previous version of this article stated that the Orthodox Cottage was the original Gwynedd Friends Meeting House, it has been updated.