In Celebration of Phil Albright 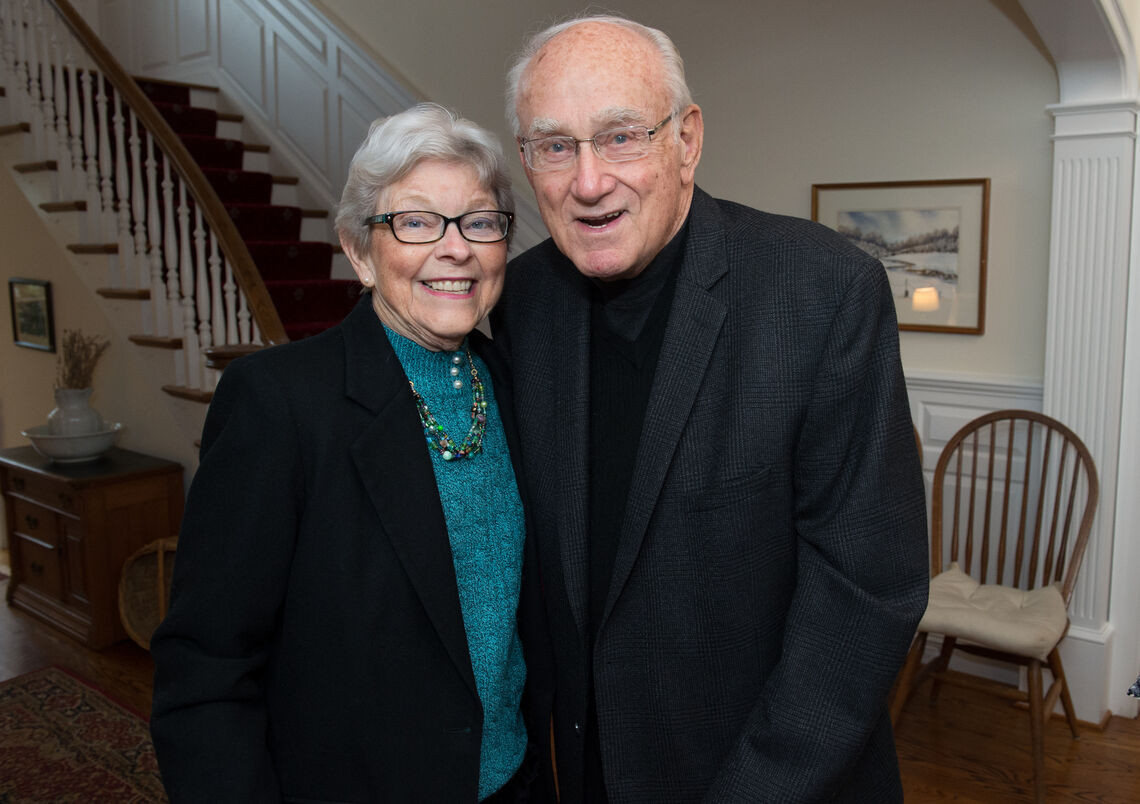 We celebrate the life and legacy of Philip R. Albright who passed away this year at the age of 88. Phil is a legend at Wissahickon Trails, a friend, leader, and mentor who we will remember fondly and whose legacy lives on in the preserved lands of this region.

Phil and his wife Barbara are natives of Evanston, Illinois. Phil earned a degree in Civil Engineering from Stanford University and served as a First Lieutenant in the United States Army, honorably discharged in 1963. He and his family moved to the Philadelphia area in 1977 and he subsequently earned an Associate’s degree in Horticulture and Landscape Design from Temple University. After a career spent as an engineer and then insurance executive, Phil retired in 1996. Which is when our histories converged.

Upon retiring, Phil dedicated himself to volunteering in the Wissahickon Valley. Kate Harper, board member, said, “I remember Phil telling me once that ‘Now I have retired, I mean to spend the rest of my life working for my community’—and did he ever! He served the Ambler YMCA, Wisahickon Trails, Wissahickon Valley Public Library, Rotary Club of Ambler, Ambler Theater, Mattie Dixon Community Cupboard, and a host of other community organizations. He was a guy who worked at whatever he was asked to do and did it well. I looked to him for wise advice and he was generous –but only if asked—in giving it. His life was a gift to our community and he will be missed.”

At Wissahickon Trails, we were lucky to call Phil and Barbara friends for nearly 30 years. On paper, Phil was a generous donor, board member (2003-2012), board chair (2008-2010), and served on the Advisory Board (2012-2021). But the gifts he brought to the organization can’t be recorded on a resume or in a database. It was his insightful and direct approach coupled with his warmth and kindness that we will hold dear. He believed in the protection of open space and the value of being good stewards. “God doesn’t make land anymore. So, we’re not going to get any freebies. We have to take care of the land we have, and we do a good job of that.” A supporter of educating the next generation he said, “We have to keep broadening our footprint. Working with the younger set, grade school level particularly, is where these kids are going soak up this knowledge about the critters in the creek and all that good stuff. This is where it starts.”

As board member Neil Trueblood said, “There are a few in the community that simply give it all, consistently, and he is one who led many to do important community building. I will miss his friendship, leadership, wisdom and warm, caring personality.”

Below you will find some tributes for Phil from our staff and board members.  If you would like to read Phil’s obituary or leave a tribute for him, you can do so here.

Remembrances and Tributes for Phil Albright

"Where do you start to write a tribute to Phil?  Probably others have better specifics than I do about his contributions to various causes.  What I remember about Phil is that he was so well known for his dedication to community causes but still made time to relate to newcomers.  I remember an evening shortly after I became a WVWA board member at Phil and Barbara's house...it was some kind of fund or friend raiser, of course.  My husband and I sat with Phil and Barbara for probably an hour just getting to know each other.  He had wonderful stories of times good and bad to share.  The warmth and depth of his relationship with Barbara also became clear - and we know how true he was to her.  Phil was one of a kind and I will truly miss him." - Nancy Kreider, Board of Directors

"Phil and I go back to when I was a kid on the Ambler YMCA board of governors in the 1980’s.  He quickly connected with me and provided important mentoring. He would greet me, even recently, with a “hey kid how’s it going?”  Meeting him anywhere was a joy.  There are a few in the community that simply give it all, consistently, and he is one who led many to do important community building. I will miss his friendship, leadership, wisdom and warm, caring personality." - Neil Trueblood, Emeritus Board

"Oh my, what a loss for the extended Ambler community and, of course Barbara and family and their many friends. I know him best for his and Barbara’s enormous generosity for the Ambler YMCA which bear their names.  His shadow is also certainly long over the Wissahickon Watershed where he was a leader for many years. All our love and sympathy to Barbara and family. He was very active in support of the Temple Ambler Campus and its horticulture programs. I knew him when I was at the Philadelphia Area Y and raising funds for the new Ambler Y. He and Barbara were the first major donors with a million-dollar lead gift. Their love of the YMCA came early as they were young “tadpoles”. He was a staunch supporter of the Ambler branch."  - Pete Hoskins, Board of Directors

"Some of us are fortunate to have one or both parents live until we are adults with a family.  Mom and dad are often mentors in life’s challenges as we work on our careers and child raising.  Besides my dad who provide such support and encouragement, I had two other valuable mentors as an adult.  One was a neighbor in my younger years and the other later was Phil Albright.  We met many years ago serving together on several boards.  As I took on leadership positions in several organizations, Phil was a role model offering me advice and encouragement. Direction from Phil was direct, humbly offered, enriching, and always “spot on”. A nod or frown at a meeting or a follow-up call after helped me navigate some tough situations.  I have contributed to the community as a volunteer with the help of his genuine and unselfish counsel; I will always be grateful.

Phil and Barbara Albright have been masters at giving. I once learned a life lesson from a church leader who reframed the adage that one should give until it hurts to rather, one should give until it makes you smile.  That smile reflects the warm feeling inside when you give time or resources and know that someone, or many will benefit. It feels right and good.  Phil and Barbara’s generosity exemplified that way of thinking and caring. Many times, Phil shared with me how he felt being able to give to causes and places that he believed in, and while they were alive to see the benefit rather than after their passing. The almost impish or sheepish smile that followed showed in a subtle way how he felt and the value to him. That will always remain among my fondest memories of Phil." - Rick Collier, Emeritus Board

"I remember Phil telling me once that “Now I have retired, I mean to spend the rest of my life working for my community”—and did he ever! He served the Ambler YMCA, the Wissahickon Valley Public Library, the Ambler Rotary (WVWA bridge), the Ambler Theater and a host of other community organizations. He was a guy who worked at whatever he was asked to do and did it well. I looked to him for wise advice and he was generous –but only if asked—in giving it. His life was a gift to our community and he will be missed." - Kate Harper, Board Member

"I always found Phil to be generally quiet but when he spoke, everyone listened. Also, he was genuinely interested in what we were doing at the Mill and made it a point to ask me about our progress." - Duane Deaner, Board of Directors

"Phil Albright has truly been a singular and valiant crusader in his commitment to our community. In seeking ways to make the world better, he focused his energy, talent and dedication on the people and places we are fortunate to share. His loss will be hard to overcome, but if we follow his example, we can make sure his light continues to shine." - Suzanne Bush, Board of Directors

"Phil was a generous giant in our community who gave his time, talent and treasure to the numerous causes that he believed in.  His commitment to Wissahickon Trails is reflected in the Albight's lead gift for our upcoming Barn Renovations. It was at Phil's insistence that I joined our Board years ago. "Mary, The Watershed is a worthwhile organization and you should be on the Board."  Of course, Phil was right! It has been an honor to serve with such an active, committed group of people. Phil was my mentor and a wonderful friend whom I shall miss more than words can express." - Mary Claghorn, Board of Directors

"Phil was a strong leader, who never shied away from sharing his opinion or making the hard decisions. He led by example, giving generously his time, talent, and treasury to WVWA and many other organizations in the area. He will be greatly missed." - Dee Hillas, Emeritus Board

"My memories of Phill Albright are full. I enjoyed talking with him. We bantered a lot with smiles and laughter. He was a very generous guy and not shy about soliciting others to follow his lead, myself included. I could never say no to him. He was observant and thoughtful and always realistic. Phil was a wonderful gentleman. I will miss him." - Bill MacDonald, Former Member Board of Directors

"I have only known Phil for about 4 years.  But I quickly learned that when Phil wanted to be a part of a project this meant at least 2 things would happen: 1.  With his input, the project would be improved; and 2. we would have a good time doing it! I never had a meeting with Phil where I didn’t leave with new insights to think over and a smile on my face." - Gail Farmer, Executive Director

"Phil has been my friend and mentor for over 20 years, he had a knack for connecting organizations with people who could support them.  He would look around and determine 'this needs to be done' and then find the right match to make it happen.  When he would ask you to help, not only was it hard to say no, you didn't want to as he was so good at aligning a person's interests with an organization's needs.  When Phil had a twinkle in his eye, you knew you were in for an adventure, we will all miss him as we continue on the journey he started us on." - Michaelle Fleisher, Finance & Human Resources Director

"I met Phil when I started at Wissahickon Trails in 2003. Being my first job in the non-profit sector, Phil was a great example of a board member and donor that supported an organization holistically with his generosity and enthusiasm. I appreciated his honesty and guidance over the years and always looked forward to having his help at events. Personally, I loved when Phil would visit the office and sit down to have a chat. I would always learn something new and he would always brighten my day." - Lisa Hansell, Senior Development Manager