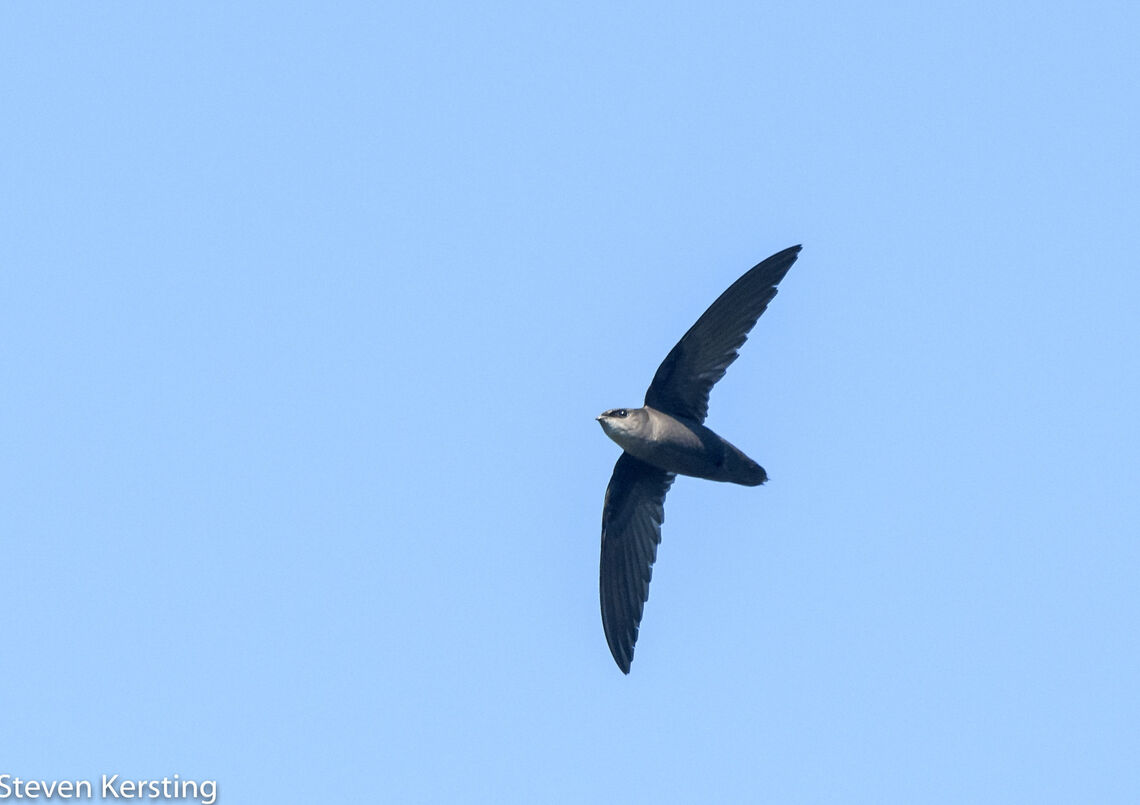 Chimney swifts (Chaetura pelagica) are one of the most distinctive bird species in North America, easily identified by their stocky silhouettes, chattering voices, and impressive aerial acrobatics. They are an integral part of a healthy environment, and some of nature’s most effective pest controllers; one bird can devour more than 1,000 mosquitoes in a single day. This helps greatly reduce the need for pesticide use. In the last few decades, however, chimney swift populations in the United States have dropped more than 50 percent – Canadian populations by 90 percent. There are two primary reasons assumed for this alarming decline; pesticide use that limits the availability and diversity of insects, and the loss of habitat - both on their wintering grounds in South America, as well as right here in Montgomery County. So we have the opportunity, at least, to combat part of that habitat loss.

Unlike many birds, chimney swifts spend almost their entire lives on the wing and are incapable of perching  – this means they also have very specific needs in terms of habitat, as well as adaptations to living a vertical life. In the past, hollow trees served as nesting and roosting sites - these provided the textured interior surface that the birds need to be able to cling to vertically with their specially designed, claw-like toes and stiff tail feather projections. With industrialization, and an increase in the removal of dead trees, the birds lost that habitat and adapted to using human-made structures instead, thus earning their name.

Despite their rapid adaptations over the last century, populations have declined drastically. Alternative heating systems are rapidly replacing existing chimneys, new chimneys are being constructed in a way that makes them unusable to swifts, and old remaining chimneys are being capped. All of this means swifts have fewer and fewer places to go.

But, there is good news. Habitat for these remarkable birds can be created in the form of artificial chimneys or ‘towers,’ which serve as essential nesting and roosting sites. Swifts occupy these towers during the summer breeding season and roost in them during fall migration – sometimes by the thousands. In July of 2017, we finished the construction of our first tower at Crossways Preserve, and three more were completed in 2018 at Dodsworth Run Preserve, the Wissahickon Waterfowl Preserve, and at Fort Washington State Park. Another will be built in the spring of 2020 on a private farm in Blue Bell.

The three towers built in 2018 and the next to be built in 2020 are funded by Wyncote Audubon, whose Wissahickon Trails’ Birdathon team raised money for the project over the last several years. We will be monitoring the installed chimneys in the spring, summer, and fall throughout the coming years, and hope to continue our efforts to help further the conservation of this special species in the Wissahickon Valley.

More reliant on man-made structures than perhaps any other birds, chimney swift populations are also more easily helped by our actions than many. If you have a chimney, be sure to have it cleaned either prior to their breeding season or after it (they breed from about April to August). If possible, leave it uncapped until the winter. And of course, help us spread the word about this amazing species and their need for conservation, and support Wissahickon Trails in our efforts!

Wissahickon Trails has created an online form to be used by anyone who has observed chimney swifts at a particular site, either nesting or roosting. Our goal is to collect this information in order to create a registry of sites known to be used by chimney swifts now, so that those places can be protected for the birds who depend upon them. We are also interested in learning more about what sites are preferred over others and what habitat characteristics might be replicated elsewhere, so that we are better informed and can create the most swift-friendly habitats as possible.

If you’re interested in learning more about chimney swift conservation and how you can help collect valuable data, contact Conservation Manager, Margaret Rohde, at margaret@wissahickontrails.org or sign up through this chimney swift monitoring form.